Mikey Wright & Isabella Nichols have taken epic wins at the Boost Mobile Pro Gold Coast in pumping surf at South Stradbroke Island. The pair had to overcome a field of some of Australia’s best surfers in four-to-six foot waves to claim victory in the second event of the World Surf League (WSL) Australian Grand Slam of Surfing.

Mikey Wright has show that his 18-month comeback from injury is complete with an incredible victory in pumping but challenging conditions at South Stradbroke Island. Wright displayed why he is looked at as one of the most exciting surfer’s on the planet as he pulled into deep heaving barrels and laid his trademark power gouges to take his first event win in over two years. Wright overcame local wildcard, Liam O’Brien, with a dominating display in the final, winning with the highest single-wave score of the event, a 9.83 (out of a possible 10). Wright is now tied with Ethan Ewing as Jeep Leader of the Australian Grand Slam of Surfing.

“It’s great to take the win and I’ve had some great heats and waves through this event – these chunky barrelling waves really suit me,” Wright said. “Getting that barrel early in the final felt good. I stayed high on the take off and steered through with the wave cooperating for me which always helps. Taking the Jeep Leader Jersey jointly into Margaret River feels good – I like Margaret River and it will be good to get there again and surf some serious waves. I’m just stoked to be back competing and performing well.” 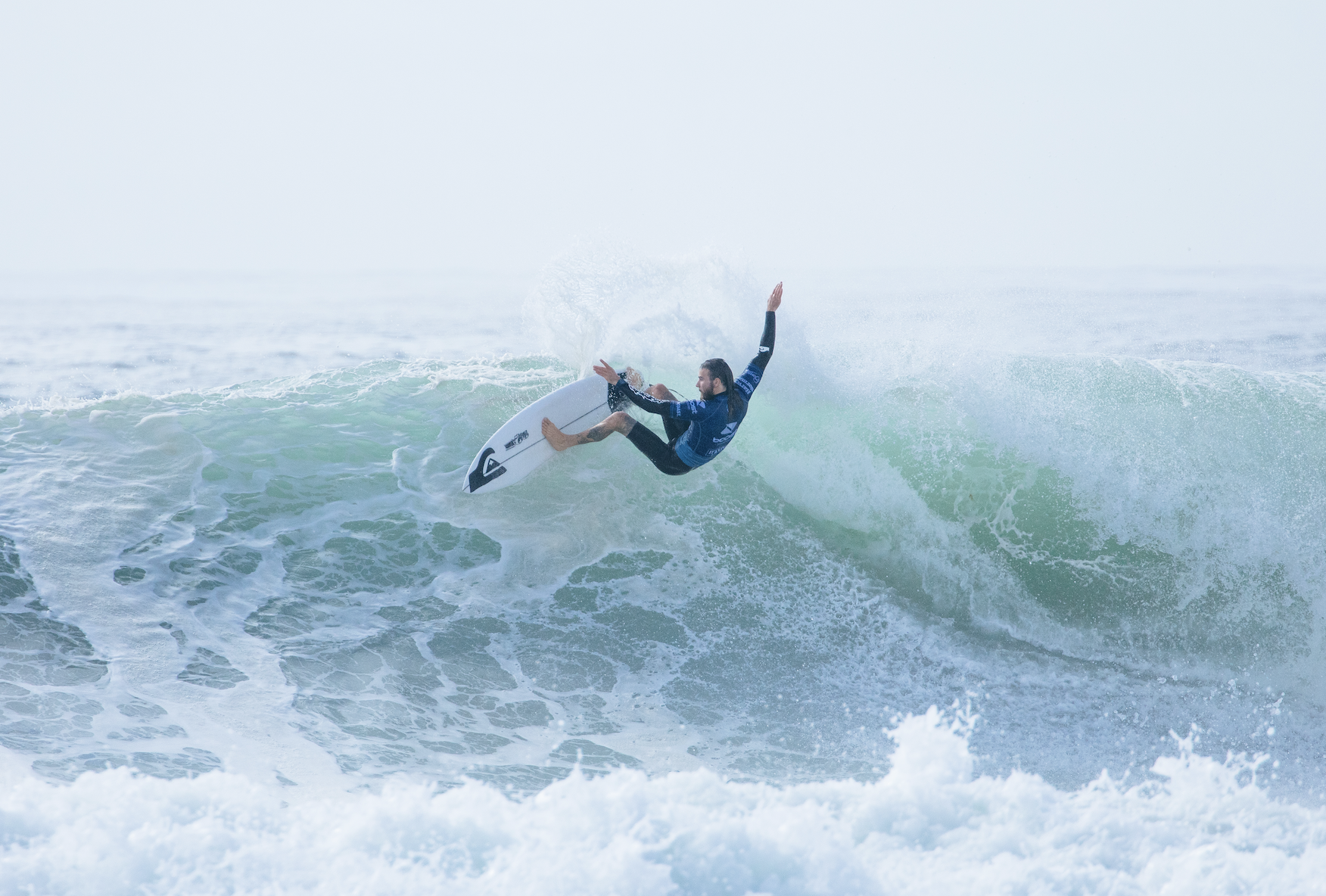 Caption: Mikey Wright returns to the podium with a victory at The Boost Mobile Pro Gold Coast.
Credit: WSL / Cestari

2019 was a breakthrough year for Isabella Nichols who locked herself in a spot on the elite Championship Tour for the 2020 season. With the tour being cancelled, Nichols was left disappointed with a first-round elimination at the Tweed Coast Pro last month and vowed to pick herself up for the Boost Mobile Pro Gold Coast and that’s exactly what she did, dominating each heat over the two-day event. In the Final, Nichols came up against fellow Sunshine Coaster Sophie McCulloch and took control of the matchup from the outset, posting two keepers while McCulloch struggled to find rhythm. With this win and Tyler Wright’s early-round elimination yesterday, Nichols now takes the series lead for the Australian Grand Slam of Surfing with one event left, The Margaret River Pro.

“It’s crazy that I’ve won this event and I’m now leading the Australian Grand Slam Ratings and will take the Jeep Leader Jersey into Margaret River – I’m over-the-moon,” Nichols said. “I really enjoy these types of waves even though I’ve had a lot of big wipe-outs throughout this event as well, but it feels great right now to have taken the win. I had a pretty nervous start at the Tweed Coast event and was keen to make up for that here — taking the win feels amazing. I’m looking forward to Margaret River, fingers crossed we get there. I visited Margaret River early this year to familiarize myself and it’s exciting — I can’t wait.” 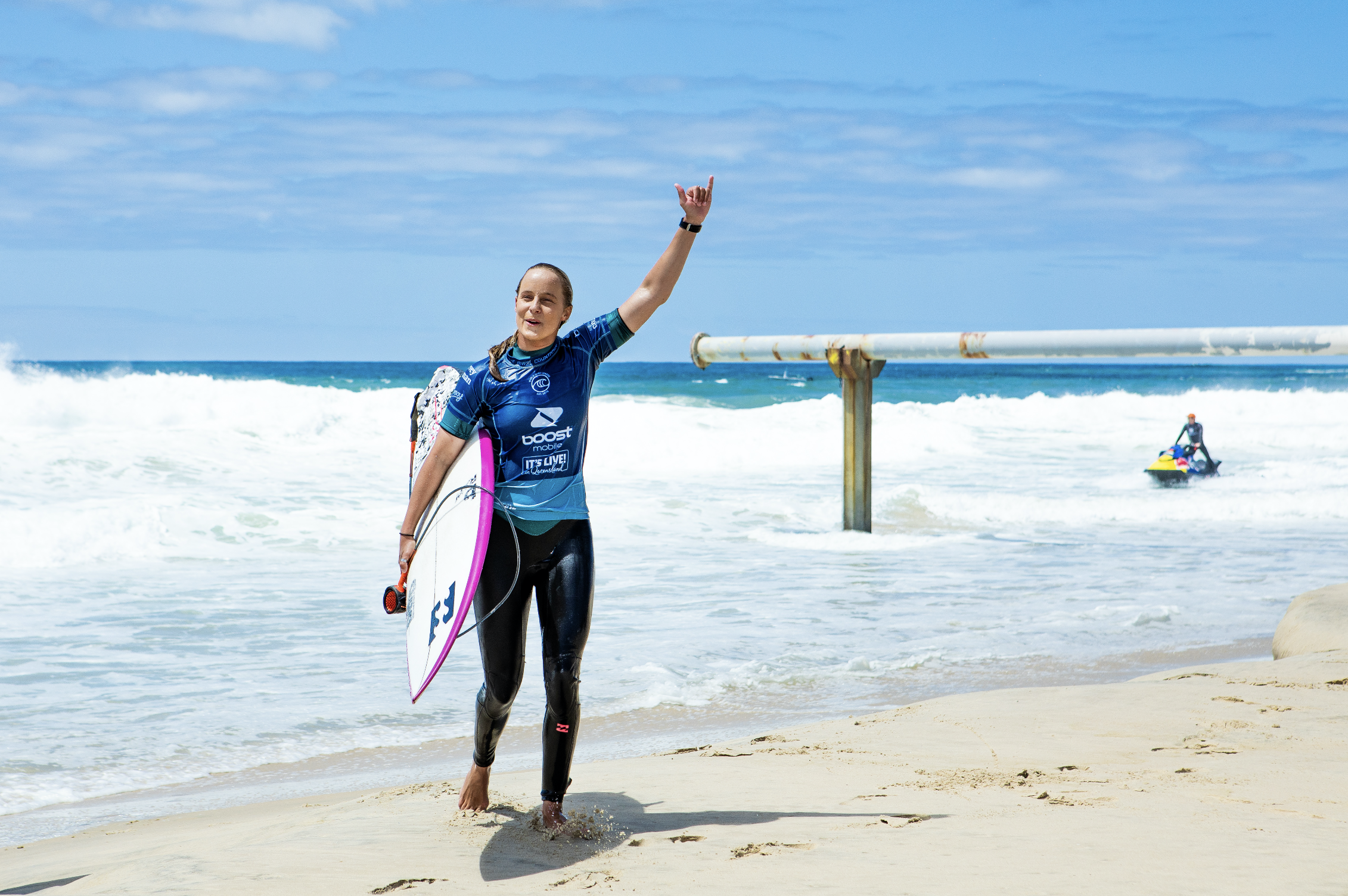 Local Wildcard Liam O’Brien was on fire all event showing the strength of his knowledge of the peaks at South Stradbroke Island, posting some of the highest scores of the opening day of competition. As the wind increased during the Finals, O’Brien struggled to find his position while Wright picked the gems to take the victory. O’Brien leaves Straddie with experience you couldn’t pay for ahead of his attempt to qualify for the CT in 2022.

“I didn’t even think I was going to compete in this event so to end up in the Final is pretty surreal,” O’Brien said. “It would have been nice to get to the win but Mikey deserved it, he really dominated that heat so hats off to him. I spend a lot of time over here at Straddie so it was cool to have an event here. I’m stoked we got some epic waves and I was able to sneak into a couple of barrels — it’s been a really fun couple of days.” 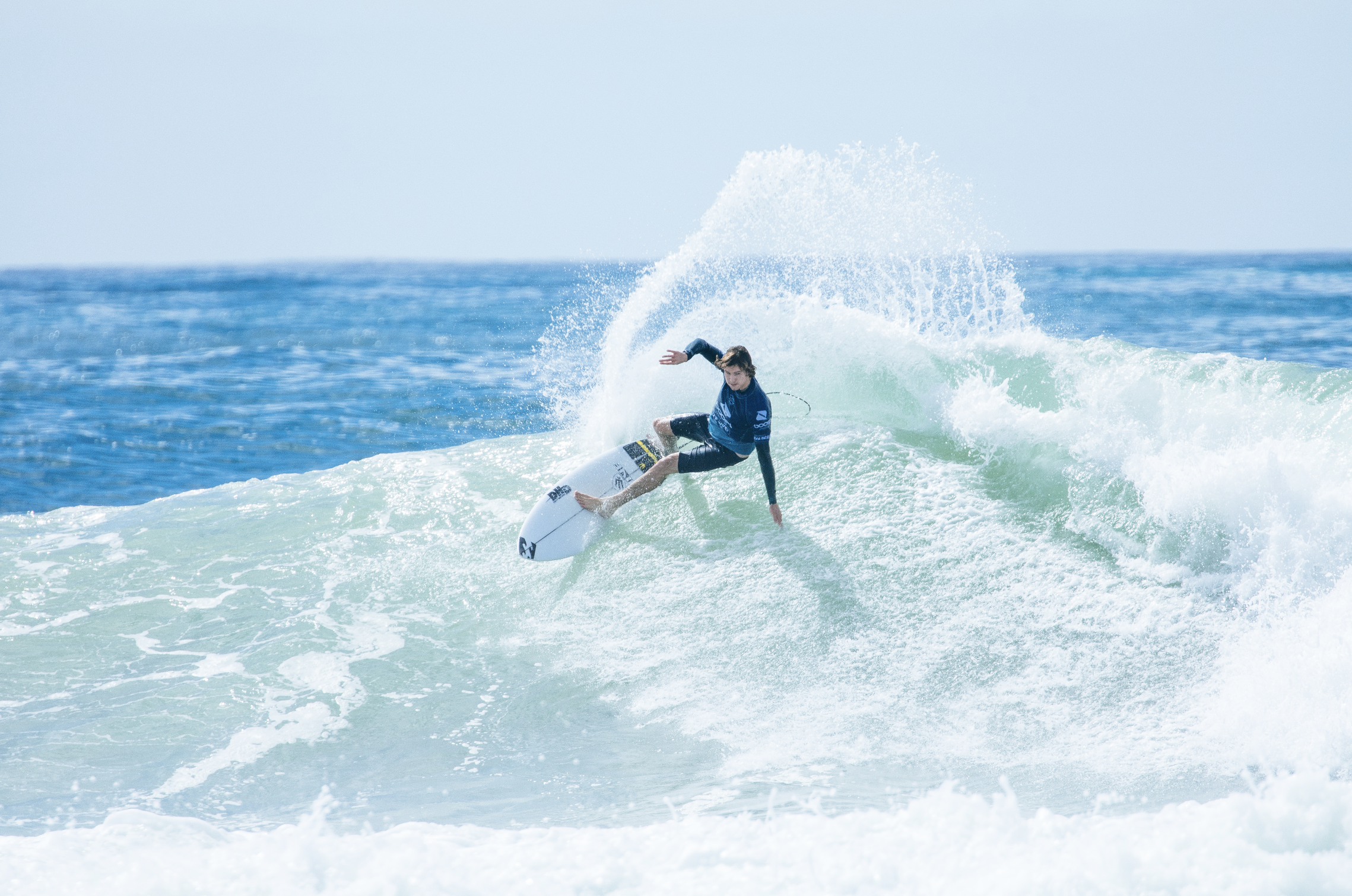 “I’m a bit disappointed with the final just because I couldn’t find any waves,” McCulloch said. I’m really happy to have made the last heat of the event with one of my best friends Isabella — that was great. I’m definitely proud of my performance over the last few days — especially in a field that has 8 of the top 17 women surfers in the world — there was a lot of talent on show. It was pretty intimidating out there and I was definitely out of my comfort zone so I’m happy to have found some waves — it’s definitely been such a great experience that I can put towards future competitions.”

Day 1 standout Jack Robinson was unable to continue his searing form in the tubes of South Stradbroke, going down to eventual event runner-up Liam O’Brien in Semifinal 1, leaving him with back-to-back equal third-place finishes at the Australian Grand Slam of Surfing.

Series standout Ethan Ewing showed glimpses of brilliance but was unable to move past the Quarterfinals, going down to Wade Carmichael who eventually finished equal third.

The opening heat of the morning saw the clock wound back with a heritage heat taking place between five of surfing’s most iconic and celebrated names. 1999 World Champion Mark ‘Occy’ Occhilupo came up against Bede Durbidge, Dean Morrison, Brendan Margieson and Kieren Perrow in a 30-minute shootout where all competitors showed they still had it in hollow spitting tubes. In the end, it was the iconic free-surfer Brendan ‘Margo’ Margieson who took the win with an awesome backdoor tube ride with a sneaky ‘doggy-door’ exit.

“I’ve only had one big win in my career and that was in 1996 at Nias so this feels amazing,” Margieson said. “It was such an honour to get the call up for this event and get to surf with some of my great mates and favourite surfers — especially in such pumping surf. I feel I was lucky to get that barrel because all of those guys are still so talented — I’m just so stoked to have had this opportunity.” 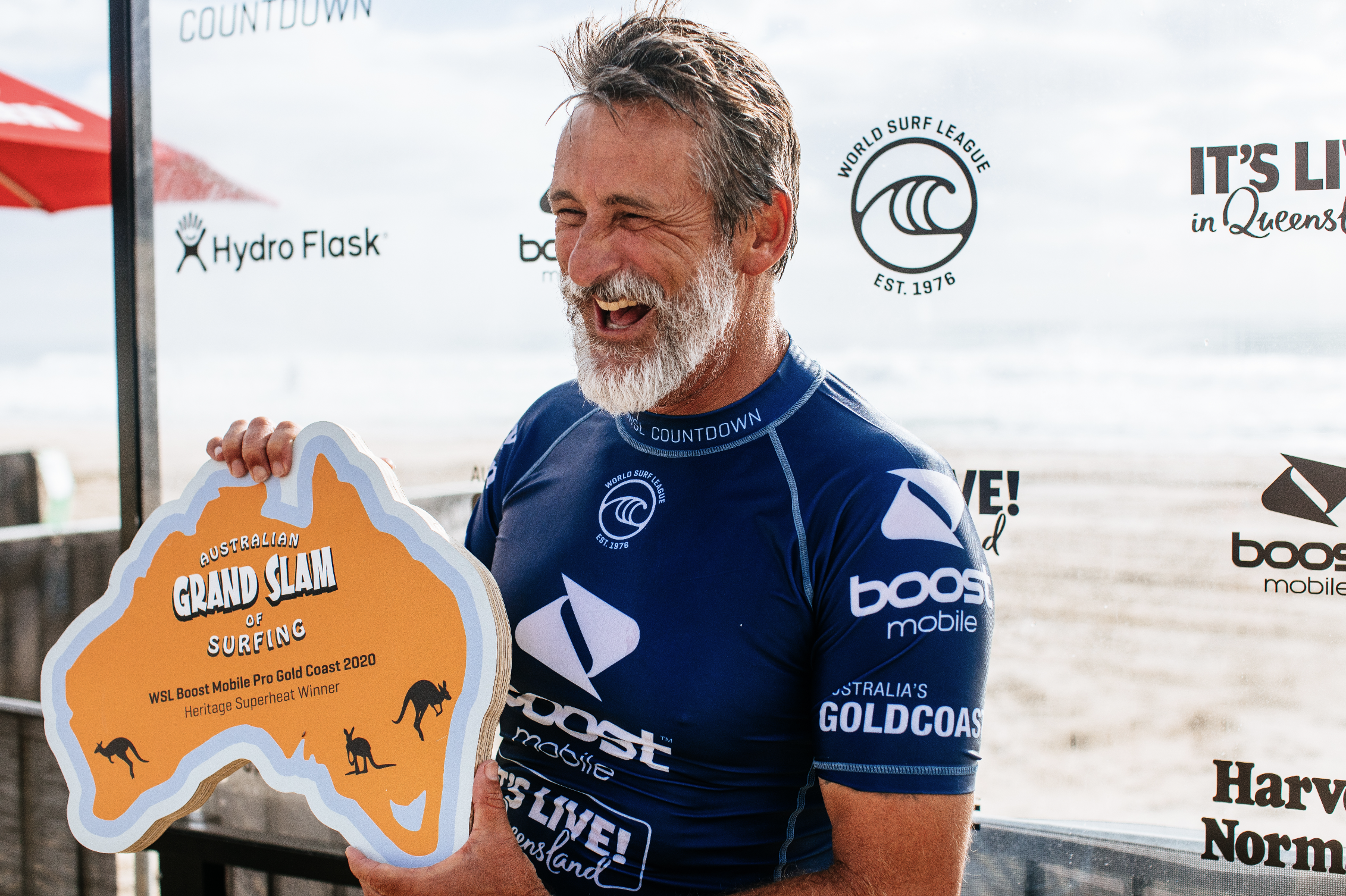 There was excitement all over the globe this weekend, with Australians cracking the top 10 on all five main tours. An outrageous Saturday 63 thrust Sydney’s Cam Davis into the final group on Sunday at a PGA Tour event for the first time and while the 2017 Australian Open champion couldn’t reel in Sergio Garcia, […]

What is a Jack? Tasmania’s NBL team name revealed

The NBL’s 10th team will be named the Jack Jumpers, according to Tasmanian reporter Brent Costelloe. Tasmania is set to join the NBL from the 2021/22 season and last week the franchise revealed the final two names in the running to be the team’s official nickname were “Tridents’ and ‘Jack Jumpers’. It is now being […]

Want To Write For Ozsports Online Network? – How to Pitch Us an Idea